InfTimer 1.3 has just been pushed to all the bhop servers.

New Legits:
Legit Pro is back! A harder version of legit, that is very particular about perfects and good control of your jumps. I hope you enjoy it. Our previous legit has become legit easy and has been changed slightly.

You have NOT lost your points from your legit style; they will be kept. Your previous points earned from legit also don't affect them on the new modes, so feel free to grind away! (more on that further down)

TAS Wipes:
All TAS times and records have been wiped as the crouch bug has been fixed (you exploiters mwhahahaa). As well as this, the autostrafe has been massively improved and should work much better at all speeds. let me know what you think

As always, let me know of any issues

Someone decided to update KZTimer. I know, right? Weird.

Anyways, the major news is that the crouchjump bind has been removed from runs. This also means that a bunch of maps need to have times wiped. Notes below.

The full patch notes are below:

The times on the following maps will be reset:

I've been working on some pretty awesome features recently and we are finally ready to release them! With HoC InfTimer 1.2.0, we have a new style, Tool Assisted Speedrun! Tool Assisted Speedrun allows you to rewind, fast forward, frame manipulate and a few other awesome things to create the most optimised run! Hopefully in the future, we will be enabling slowmotion as well. Another awesome feature of TAS is that replays are (99%) accurate, so you will be able to see the final run all as one replay!

As well as this, we have just under 100 new maps for everyone to try out. Please note, there may be some hard maps on the easy server and easy maps on the hard server, so we will experiment with these maps and may change what server they are on in the future. The map list will be avaliable at the bottom of the post.

Another small fix we have made is correcting "practise" to "practice", hope everyone can sleep at night now.

Rocket jump will be updated to HoC InfTimer within the coming weeks, we are just preparing everything and ensuring that everything works as well as it can.

We will also be changing the "legit" mode back to our old versions of legit; Legit Pro and Legit Nub. We will have more details of this in the future, however the plan is to remove the legit mode and bring 2 new modes, as listed above.

The release should be happening this weekend, and we will have a short downtime to accommodatesetting up new styles, etc.

Any questions or queries, drop a reply or send me a message on steam/discord!
- Josh

Kreedz Climbing, a game that replicates the movement mechanics of Counter-Strike 1.6 (jumping, bunnyhop, doubleduck, lj, cj, etc) is on Steam Greenlight, and I've come looking for your support!

The game will be free forever with no paid DLCs, and is trying to bring KZ to mainstream attention as a game on the Steam store. The game started development over 8 years and has over 80+ maps and 150+ courses, originally it was just for bringing KZ to an updated graphics engine, but now it hopes to unite the KZ communities in a game made for them, where KZ players are the target audience.

Some of the updates to Counter-Strike 1.6 have changed or outright broken some KZ techniques, and it's an unfortunate consequence since KZers are not the target audience for the game and the priority will always be the shooter playerbase. An important force behind Kreedz Climbing's development was trying to give stability and create new techniques to master, like Bungee and Powerjump.

Some people might not like these new techniques, but ultimately they don't have to play maps that include them if they don't want to. There are many pure kz maps and it's down to the mapper if they want to add these features, and mapper possibilities and flexibility is another priority in Kreedz Climbing's development. The game supports plugins via MetaMod/SourceMod as well.

I love KZ and wanted to help create a game made by KZ players, for them. If someone asks me for a feature or has an issue, they are the target audience and important. Having a game like this on Steam will expose this style of gameplay to new players and hopefully expand the playerbase. Finally, it's going to be free, so there should hopefully there won't be any reason why a new player can't give it a go.

Please take a look at the game on Greenlight, and if you like it, give us a vote! Thank you!

As i've been teasing on the discord server, pets will be coming very very soon to the bhop servers! These pets will follow you around, run around and jump along with you These pets will be avaliable for BHOP VIP members and there hopefully will be more coming soon!

Pets are also hideable by the !hide menu, for those who prefer not to see them

We got bored and added some new player models to the servers for VIP and admins to use:


Check em out and enjoy!

Oh yea, we did add one other skin.. 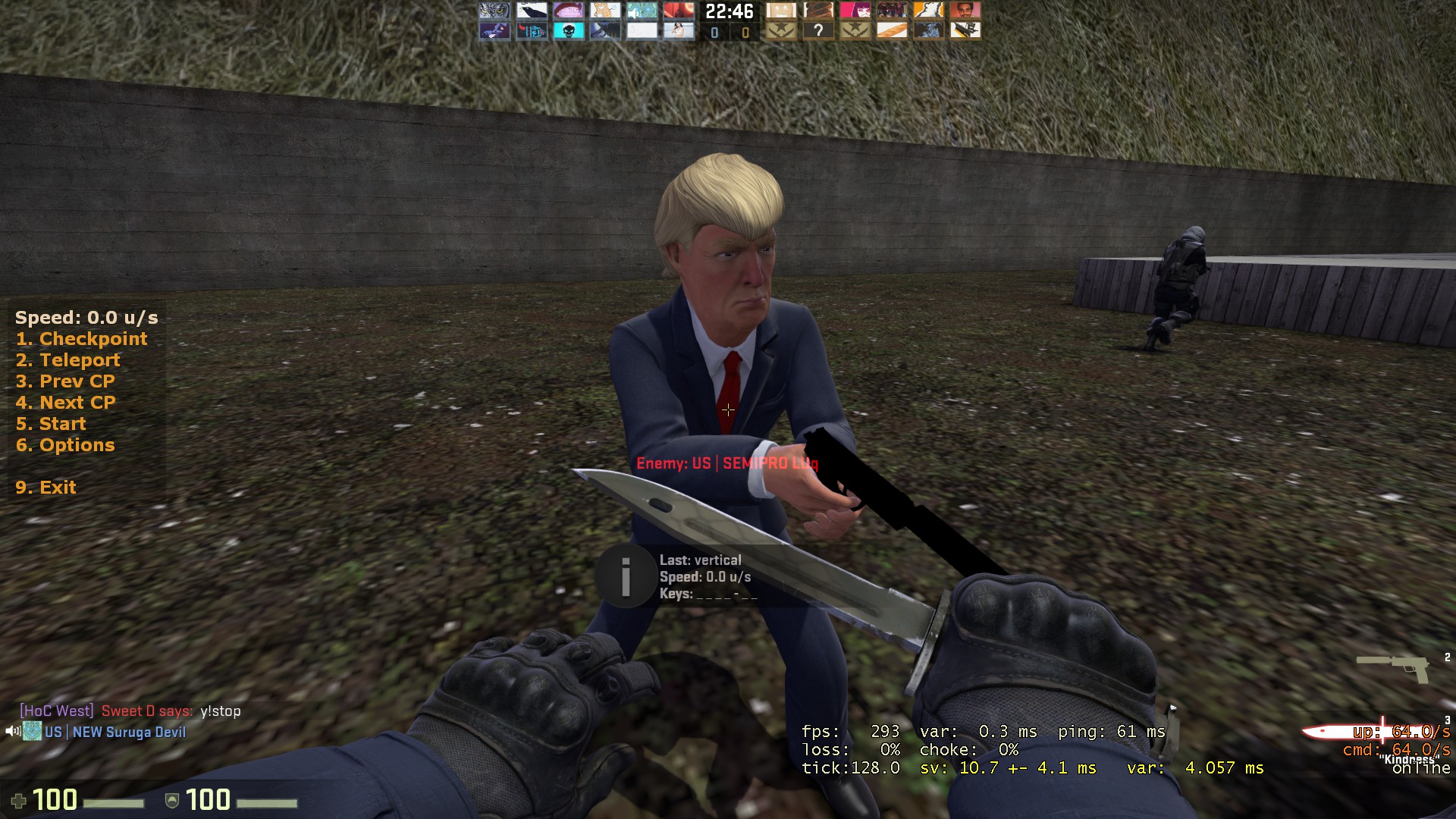 House of Climb has made the move to HTTPS. Houseofclimb.com and all subdomains will now automatically send you to secure versions of the site. Practically, this means you can now feel safe logging in from public networks and your private messages will be safe from eavesdropping.

Announcement for the 2nd KZ Tourney hosted by Zach47 and HoC:

If you'd like to donate or find out who is playing, please visit the KZ-Climb link here:
http://www.kz-climb.com/index.php?threads/2nd-monthly-16-man-kz-tournament.2075/

If you have any questions about the tournament, add Zach47 on Steam:
Steam Community :: Zach47

To start 2017 off, we've already announced the launch of our new BHOP Timer, headed up by Fusion:

We want to make sure 2017 doesn't suck, so keep an eye out on improvements and new features across all our mods as the year continues.

So we just pushed the new bhop timer to the Easy EU server (and will be pushing to all servers within the coming days). We are excited for the release, and are happy to say goodbye to our previous timer, in which survived a long time and had many bugs we couldn't fix.

So what's new and improved? I'll give a quick rundown of the features, feel free to ask any questions to either me or any of the admin team.

All times have been wiped!

1. New ranking system!
The bhop ranking system has changed from the previous level system. We now have a new ranking system, based on everyone's records and their relation to every single other record. This means, that people with 1st place records will receive more points then someone with the 50th place record.

The point leaderboard is updated every hour (we are still playing around with this number). This means that people should see their ranks update every hour (in terms of, position 35 / 10000 users). However, their rank points (and therefore their tag) will update on the end of the map.

As your points can now go down, when you connect, you will see whether you have gained any/lost any points since you last connected.

Any other questions with the ranking system, please ask, I understand that it can be confusing, but hopefully this system should better reward the good players, but still be rewarding to those who are not as good.

2. Map Zones
I've spent hours and hours rezoning every single map. All 400 or so of them. While I have try to kept them to global standard, some maps may have incorrect zones. If you find a map with a incorrect zone, or a player comes to you and tells you about a incorrect map zone, please send me a steam message with the map name and a screenshot, or video that contains the correct zone.